At the Art Biennale of Venice in 2015, we created during the masterclass Stop War in Congo – a fictional political art practice by Milo Rau a short movie of 15 minutes. In  Henry Uwurukundu – a leftist artist’s daydream we showed how an African street vendor, selling fake fashion bags of marks like Vuitton and  Gucci in the Venetian alleys to tourists, is turned into an art object. In the movie, made as a documentary, the viewer follows the artists in inventing and creating a fake art-performance centered around the bag seller. 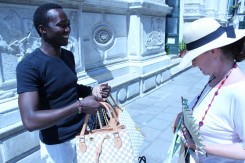 In the first part of the movie we interview two curators on the question what gives an art-object its value and how the art-market functions. We interview a Sengalese street vendor about the conditions of his life as a bag seller on the black market of the Italian leather industry. Further, the viewer follows how we invent the fake-performance, how we instruct Henry, the Black actor playing the role of the bag-seller in the performance, and how we invent his biography as a Congolese childsoldier and refugee come by boat to Italy through the Mediterranean Sea.

In the second part one sees the fake performance in the Arsenale, the famous exhibition ground for internationally upcoming artists of the highly ranked Art Biennale of Venice. The movie ends with the enthusiastic, disturbed and shocked reactions of the audience – witnessing and/or realizing (less or more) that they are part of this system of social, economical and artistic interaction.

In the masterclass Milo Rau focused on the African-European relationship in the reality of the city of Venice. We learned to think and be creative about the subject of  contemporary migration in contemporary art. With the movie we  tried to evoke something of the shared African-European legacy of colonialism, by touching the European feelings of discomfort, ignorance and inequality when being confronted with the African migrants on the streets of Venice.

At the same time, we commented on the art-market and its leftist, intellectual principles of reflection on a subject as „Africa“. We put these confusing topics and different universes into communication in the movie. In both „realities“ –the streets in Venice and the exhibition space of the Biennale –the same mechanisms show up.

Claudio Autelli (IT), Pauline Desmet (BE), Francesca Loda (IT)  and Giselle Vegter (NL) are four theatre professionals with interests in combining different media in artistic and social environments. We met during the masterclass by Milo Rau, one of the leading European theater artists of this moment. Henry Nduati Mbugua is playing the role of the bag seller.  The movie is not a project by Hotel Eldorado but the shared outcome of the masterclass Giselle Vegter took part in, related to the issues in her own work.

About Milo Rau and his International Institute of Political Murder visit the website:  www.international-institute.de